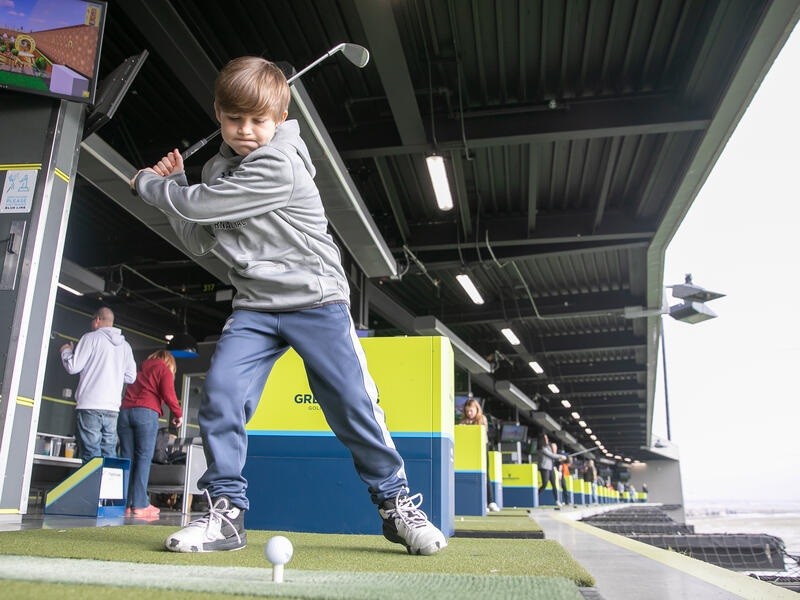 A few minutes of conversation with Cobey DeSchepper brightens spirits. There is hope for the world because there are 10-year-olds out there like this kid.

This football, basketball and baseball player was stricken with acute lymphoblastic leukemia in the summer of 2015 as a 4-year-old. He went through almost three years of treatments at Sanford Children’s, ending that era of his life with a robust bell ringing in 2018.

The story goes that the bell actually came off the wall on his first attempt but they were able to reattach it quickly and keep it ringing. Cobey’s recovery has gone much the same, except the bell never came off as far as treatment is concerned. And it’s still ringing.

Getting back to the same stuff

“You’ll get through it,” Cobey said when asked what he would tell other kids dealing with cancer. “You’ll get used to it and you’ll feel good after you’re done. You’ll get to do the same stuff again.”

The “same stuff” in Cobey’s case will actually include a lot of new stuff because he has work to do as an ambassador. It will include appearing in videos, making appearances and doing interviews with golfers the week of the tournament.

“It’s kind of cool,” he said. “I’m trying to hype for it but at the same time I’m also a little nervous about it.”

No need after all he’s been through.

“It’s an awesome week for our ambassadors,” said Josh Brewster, Sanford International tournament director. “Basically we try to have them meet as many people as they can. We want Cobey to be with us and help us tell the story of why we do this.”

Money raised via the Sanford International eclipsed $270,000 in 2020, boosted by the Birdies Give Back initiative that gave donors the option to pledge an amount contingent on the number of birdies competitors had during the tournament. Overall, that part of the campaign netted nearly $100,000 to benefit Sanford charities and nearly doubled the amount raised overall.

“We’re always going to try to have a great event for our community,” Brewster said. “But at the end of the day we really do it to raise money for local charities. Cobey is a perfect example of a kid who we were able to help with those dollars.”

Back in 2015, what would be happening in 2021 for Cobey would have seemed a wonderful answer to his family’s prayers. His mother Allison can attest to that. She will never forget the day she found out her young son was sick.

“I can remember walking through the hospital doors sobbing because I’d just heard he had leukemia,” she said.

But that changed quickly as she continued walking.

“Everyone was cool and calm,” Allison said. “When I walked in the room I saw there were toys on the bed, there’s puzzles, there were games to play. You instantly feel at ease. It’s like we knew it was going to be OK.”

“We trusted the experts,” Allison said. “It takes a leap of faith, for sure, but from Day 1 we knew that Cobey’s a fighter and whatever we had to do to hit that goal of him thriving we were going to do. We were going to make that happen.”

Being named the Sanford International ambassador served as a confirmation that the DeScheppers and their son hit the goal. They did make it happen. But they’re not done yet.

“It’s important to share our story,” Allison said. “If we can connect with families — even families where cancer hasn’t touched their lives — we will. It’s great for us to be a part of this because we get to give back. I feel like we were gifted with so many things in life for him that we want to be able to come full circle. If there is a way we can help lift his story and give others hope and belief in what Sanford is doing, we want to be a part of that.”

During that experience he’ll get the chance to tell them about his cancer and how he and his Sanford providers helped him overcome it.

“They’re like heroes because they make kids feel better,” Cobey said. “They’re funny and caring and they help a lot. Being a doctor is a really important job because they help so many people.”

Ways to get involved